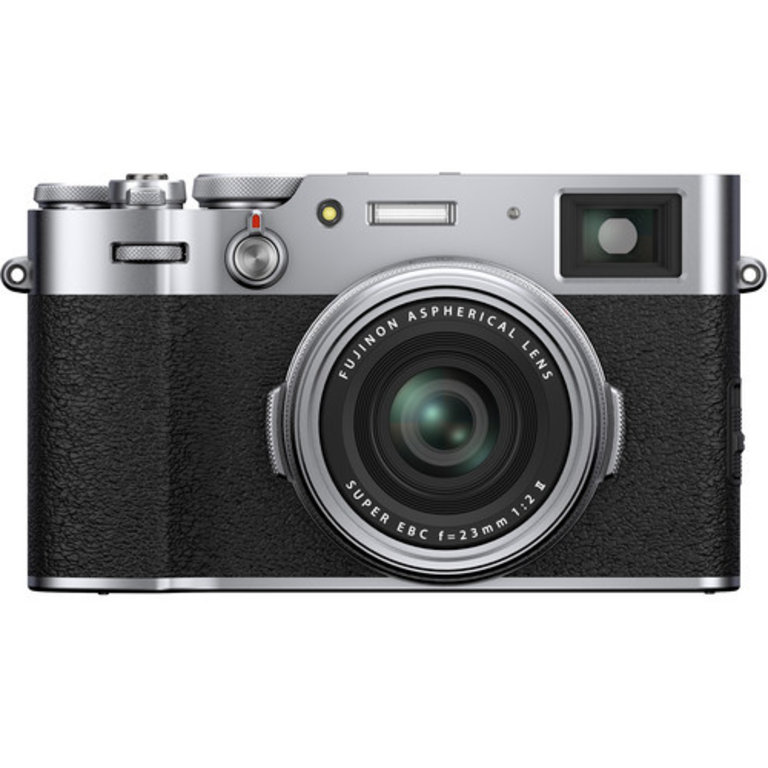 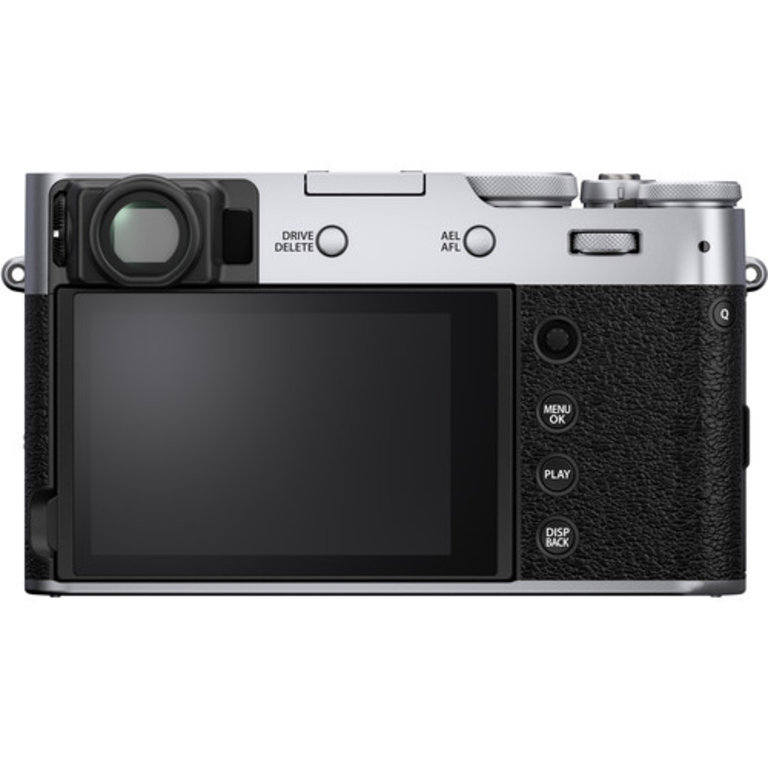 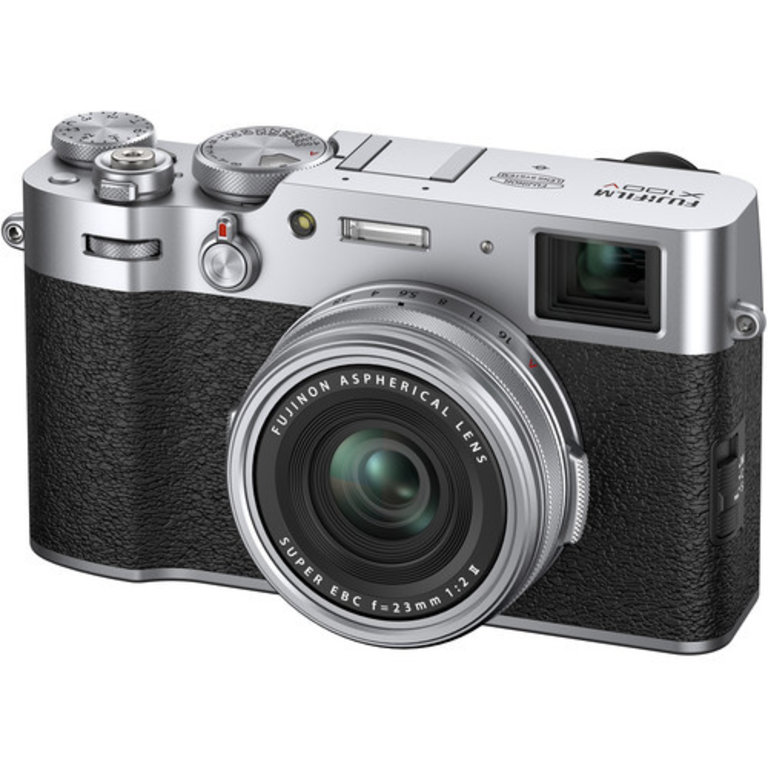 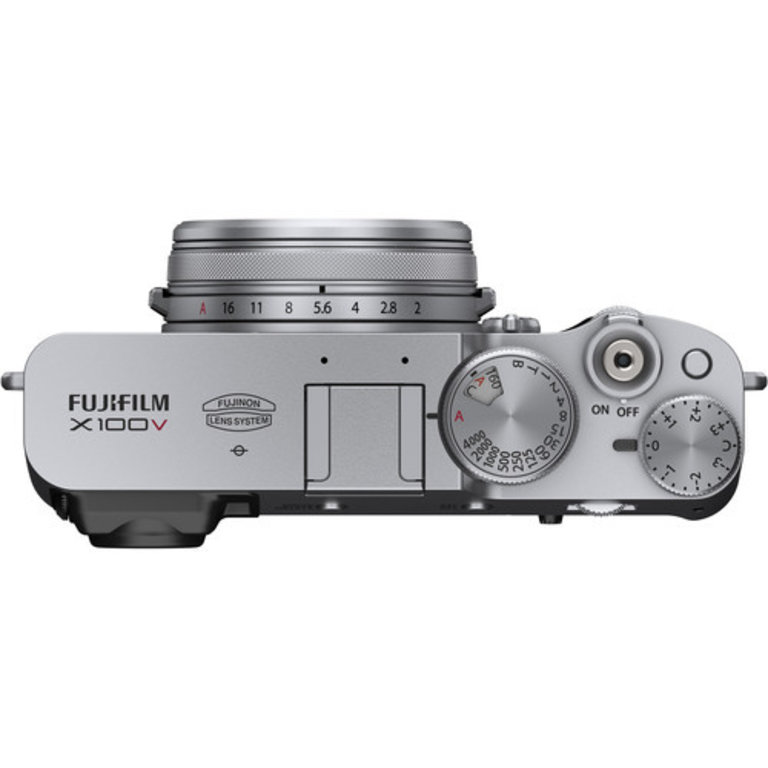 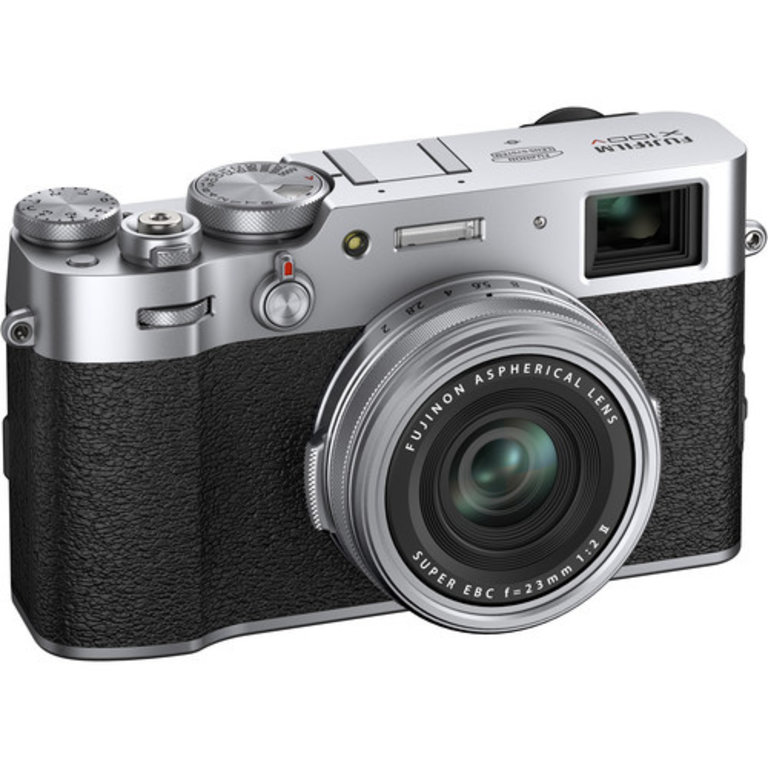 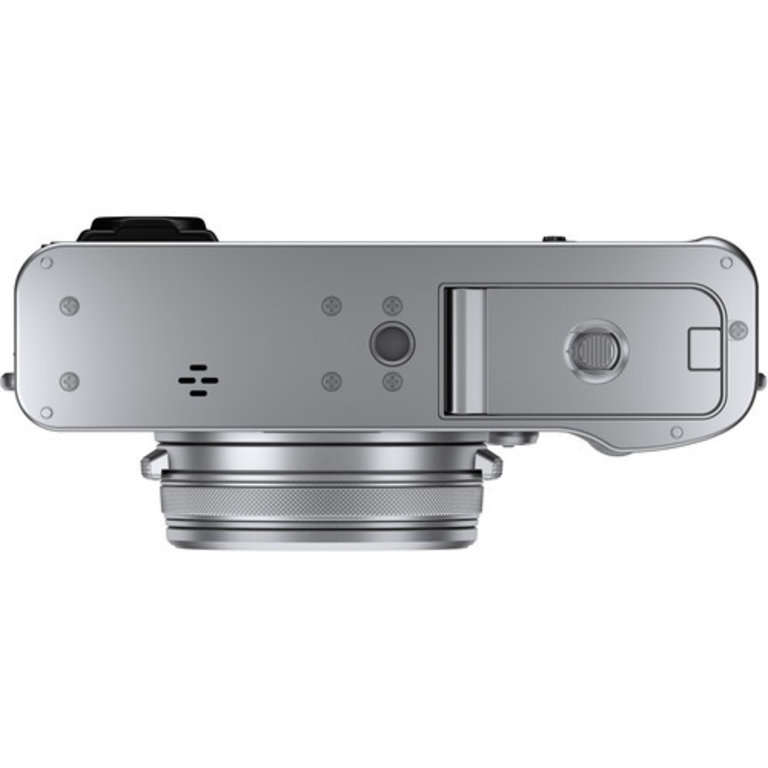 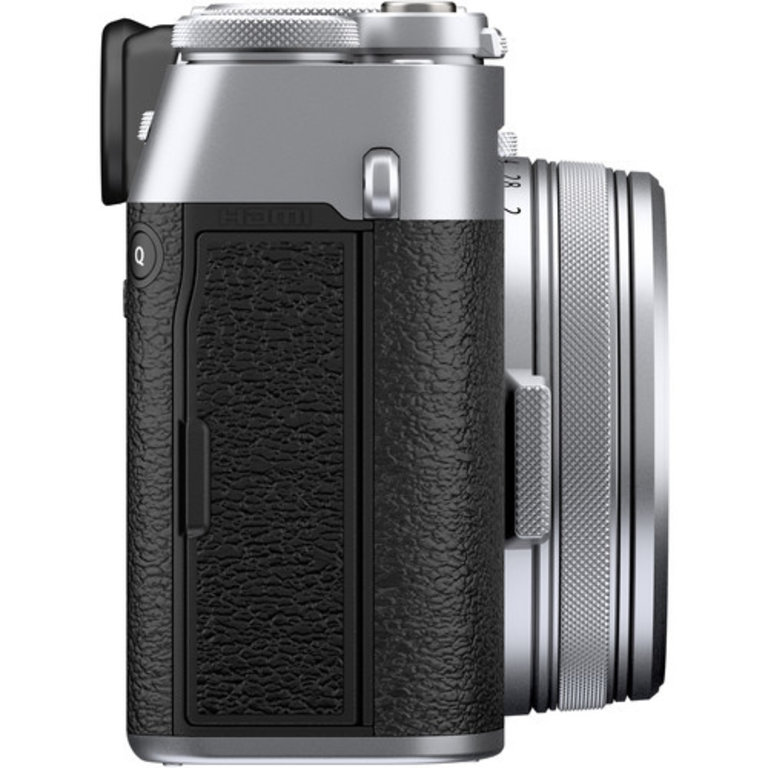 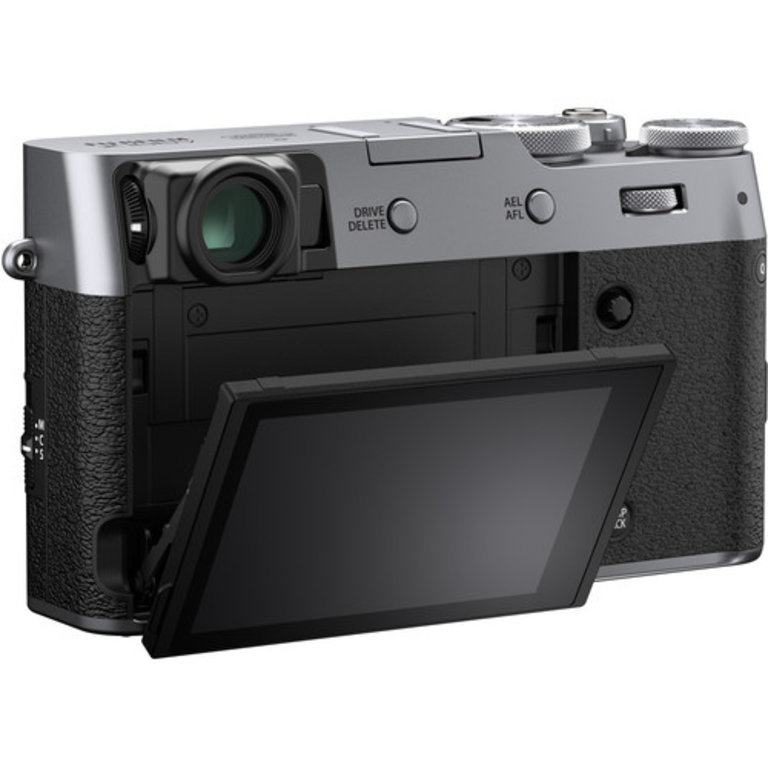 Close
Versatile, volant, and viable, the silver FUJIFILM X100V is the fifth-generation of the X100 series, blending impressive imaging capabilities, a distinct design with an apt prime wide-angle lens, and a flexible feature-set to suit an array of shooting nee
Share this product:

Versatile, volant, and viable, the silver FUJIFILM X100V is the fifth-generation of the X100 series, blending impressive imaging capabilities, a distinct design with an apt prime wide-angle lens, and a flexible feature-set to suit an array of shooting needs. Utilizing a proven and well-regarded APS-C-format 26.1MP X-Trans CMOS 4 sensor, the X100V is capable of high-resolution recording along with support for DCI/UHD 4K video, sensitivity from ISO 160-12800, and continuous shooting up to 11 fps with the mechanical shutter. The BSI design of the sensor affords reduced noise and greater overall clarity, and is paired with the X-Processor 4 to achieve fast performance and improved responsiveness. The sensor's design also enables a hybrid autofocus system that combines 425 phase-detection points with a contrast-detection system for quick and accurate AF performance.

Beyond imaging, the X100V retains the tried-and-true rangefinder-inspired body design that has made this series of cameras so special. The popular Advanced Hybrid Viewfinder is used once again, but has been updated with a higher resolution 3.69m-dot OLED EVF for clearer viewing. This can still be flicked away to reveal a clear 0.52x-magnification optical finder to suit the purists' way of photographing. Complementing the finder is a 3.0" 1.62m-dot LCD touchscreen, which features a two-way tilting design to support working from both high and low angles. Then, there is also the prized built-in wide-angle prime lens that offers a useful 35mm-equivalent focal length and a bright f/2 maximum aperture. This lens has been redesigned from previous versions to realize sharper imagery with less distortion, closer focusing, and, physically, when you attach the optional adapter ring and optional protection filter, it completes a weather-resistant design. Additionally, keeping you connected, the X100V also features built-in Bluetooth and Wi-Fi to enable wireless transferring of images to a mobile device as well as remote camera control from a smartphone or tablet.

Revolving around a highly versatile sensor, the X100V features an APS-C-format 26.1MP X-Trans CMOS 4 sensor, which has a back-illuminated design to afford smooth tonal rendering, improved low-light performance, and a wide native sensitivity range of ISO 160-12800. As an X-Trans sensor, it utilizes a randomized pixel array, too, which provides a high degree of image quality and sharpness due to the omission of an optical low-pass filter. Versus conventional pixel patterns, the X-Trans design more closely mimics the organic nature of film in order to produce nuanced colors and tonal transitions, while also reducing moiré and aliasing.

The sensor's design also includes an expanded phase-detection autofocus system, which has 425 selectable points that cover nearly the entire sensor area. This AF system delivers faster, more accurate focusing performance in a variety of lighting conditions down to -5 EV. Complementing the imaging and focusing capabilities, an updated X-Processor 4 is also featured, which has a quad-core CPU, and delivers faster, more responsive performance throughout the camera system.

Expanding its capabilities beyond stills, the X100V offers a versatile array of video capabilities, including internal DCI/UHD 4K recording at up to 30 fps and Full HD recording up to 120 fps. Greatly benefitting overall video performance, the speed of the X-Processor 4 enables fast read speeds when recording video and helps to reduce rolling shutter distortion when filming moving subjects. Also, a micro-HDMI port enables 10-bit 4:2:2 recording to an optional external recorder.

An updated Fujinon 23mm f/2 lens features a revised optical design that now includes two aspherical elements for improved sharpness and clarity through the reduction of spherical aberrations and distortion. This lens's 23mm focal length is equivalent to 35mm, making it a comfortable wide-angle prime that is well-suited to a variety of shooting situations. The bright f/2 design also suits working in various lighting conditions and affords greater control over depth of field to help isolate focus on subjects. Additionally, a Super EBC coating has been applied to suppress lens flare and ghosting for greater contrast and color fidelity when working in strong lighting conditions.

While the lens is a fixed focal length, the X100V integrates 50mm and 75mm-equivalent Digital Teleconverter settings to simulate the look of working with a longer focal length and the lens is also compatible with the optional WCL and TCL attachment lenses to expand or reduce the effect field of view.

Both optical and electronic viewfinder types are incorporated into the unique Advanced Hybrid Viewfinder, which lets you select from the simplicity and familiarity of an OVF as well as the versatility of an EVF. Changing between viewing types is quickly performed via the dedicated finder switching lever on the front of the camera body.

The 0.52x-magnification optical viewfinder provides a clear, lifelike view of the scene for easier composition and subject tracking. Its enhanced design incorporates an Electronic Rangefinder function, which mimics the functionality of a mechanical rangefinder, and simultaneously overlays information from the electronic viewfinder on top of the optical viewfinder for comparative manual focus control.

In regard to the electronic viewfinder, this OLED sports a high 3.69m-dot resolution along with a fast refresh rate to reduce lag for smoother panning and tracking movements. The EVF lets you preview exposure settings prior to shooting and has a customizable display, for configuring the amount and type of information shown in the viewfinder.

Taking advantage of FUJIFILM's vast history in traditional film-based photography, the X100V integrates several Film Simulation modes, which mimic the look and feel of some of FUJIFILM's classic film types:


In addition to simulating specific film types, a Grain Effect mode is also available to replicate the look of old film photos with an organic textured appearance, which is especially noticeable when printing. Color Chrome and Color Chrome Blue effects are also available to deepen color, tonal response, and gradation with higher saturation colors.