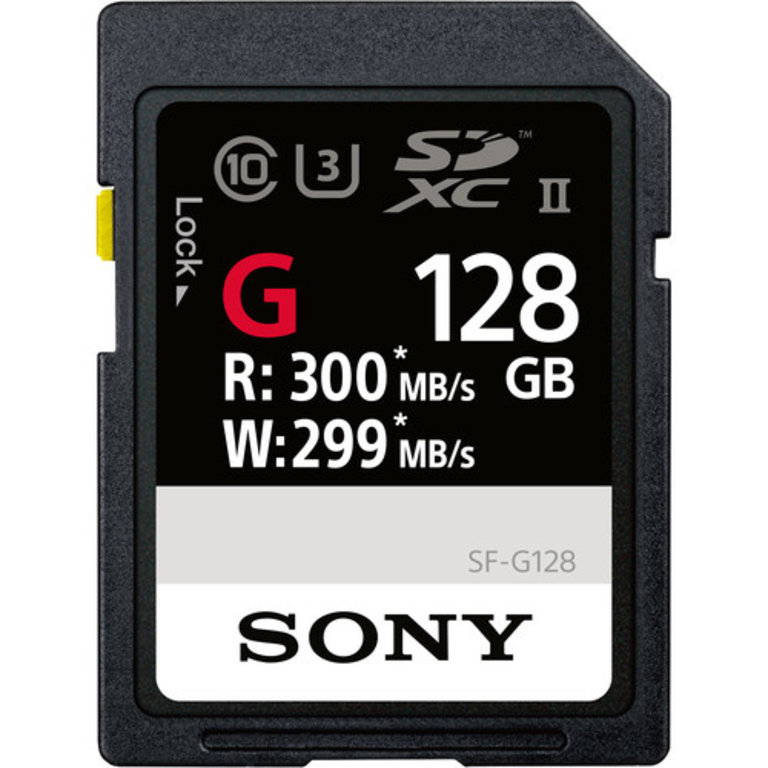 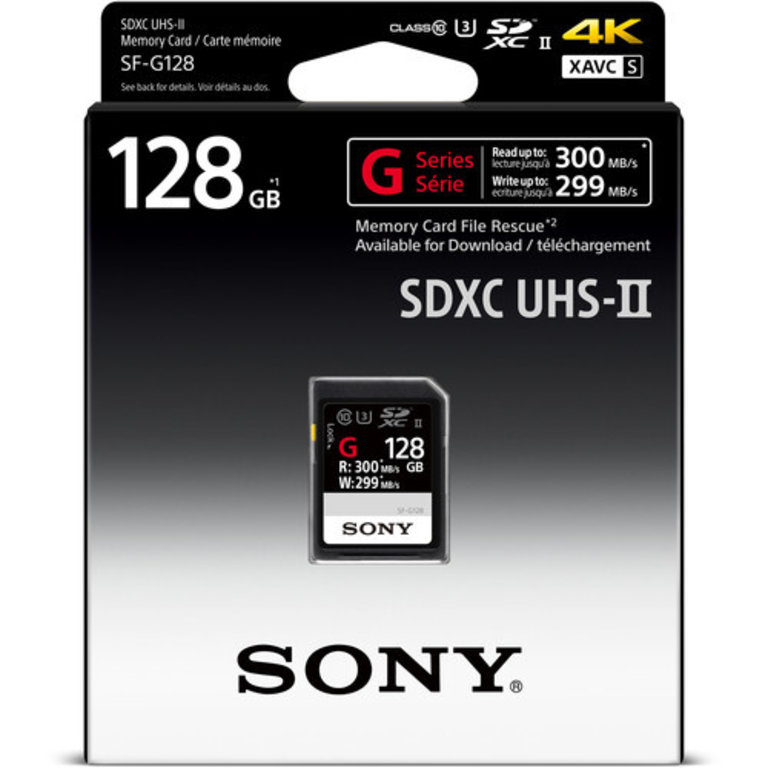 $239.99
Sony
2 In stock
•••••
The 128GB SF-G Series UHS-II SDXC Memory Card from Sony features a storage capacity of 128GB and takes advantage of the UHS-II bus to support advanced DSLR functions such as continuous shutter bursts and rapid shooting, as well as RAW and JPEG captures.
Share this product:

The 128GB SF-G Series UHS-II SDXC Memory Card from Sony features a storage capacity of 128GB and takes advantage of the UHS-II bus to support advanced DSLR functions such as continuous shutter bursts and rapid shooting, as well as RAW and JPEG captures. This card is also well-suited for video capture, including 4K, 3D, HFR, and Full HD video, and can achieve maximum read speeds of up to 300 MB/s and maximum write speeds of up to 299 MB/s. Thanks to its U3 speed class rating, minimum write speeds are guaranteed not to drop below 30 MB/s.

UHS-II media achieves its speed through an extra row of pins and while this card has been designed for cameras that are UHS-II compatible, it may be used in devices that do not support UHS-II. However, bear in mind that this card will then default to your device's speed class and bus rating, such as UHS-I and U3. If your device does not support U3, this card is compatible with the U1 and Class 10 standards, each of which guarantees minimum write speeds of 10 MB/s.

As with most Sony cards, this memory card is shockproof, X-ray proof, and waterproof, while also being able to withstand temperatures from -13 to 185°F, allowing you to take this card with you into extreme environments, such as snow and deserts. Should the card's data become compromised, you also benefit from the option to download File Rescue software for free to help recover deleted content.

The SF-G series boasts a fast write speed up to 299 MB/s, which supports the continuous shooting of high-resolution images with high-performance DSLRs equipped with the UHS-II interface. This card is also compatible with UHS-I devices.

With a read speed of up to 300 MB/s, even large files such as 4K or Full HD video captured in XAVC S, or a bunch of high-resolution images by continuous shooting can be quickly transferred to your PC. Spend less time waiting and more time doing.

This card offers reliability and durability even in intense use. It is X-ray proof, waterproof, shockproof, and can withstand temperatures ranging from -13 to 185°F.

Sometimes things go wrong and data such as photos and files are accidentally deleted. File Rescue is a powerful tool for recovering data that is simple enough for almost anyone to use and is available as a free download to memory card customers.