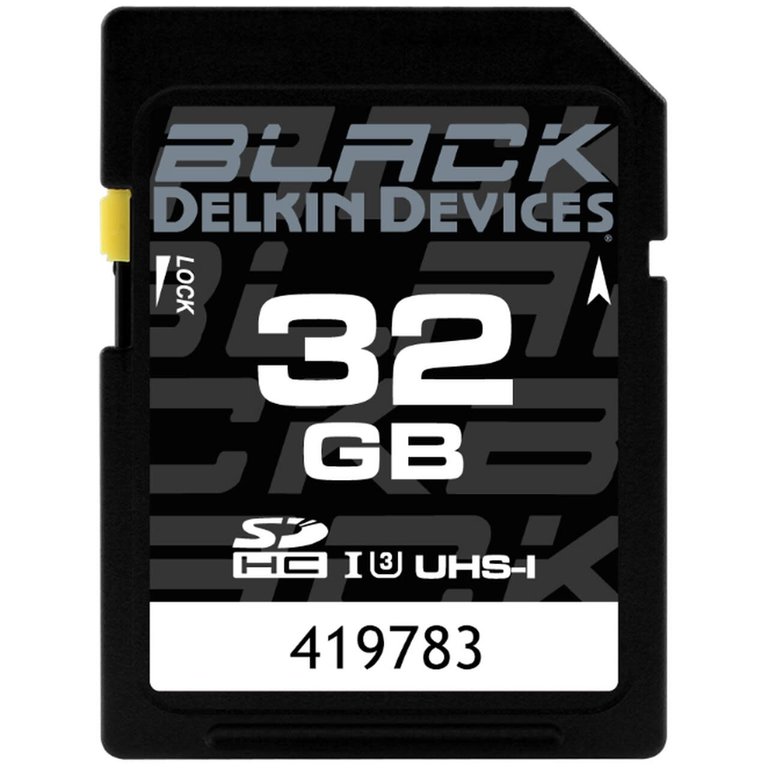 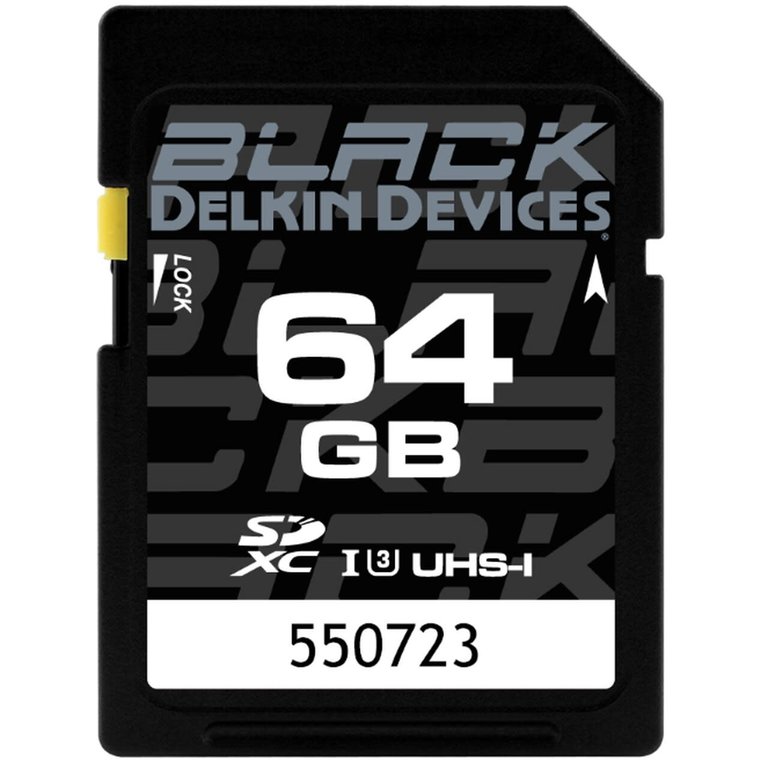 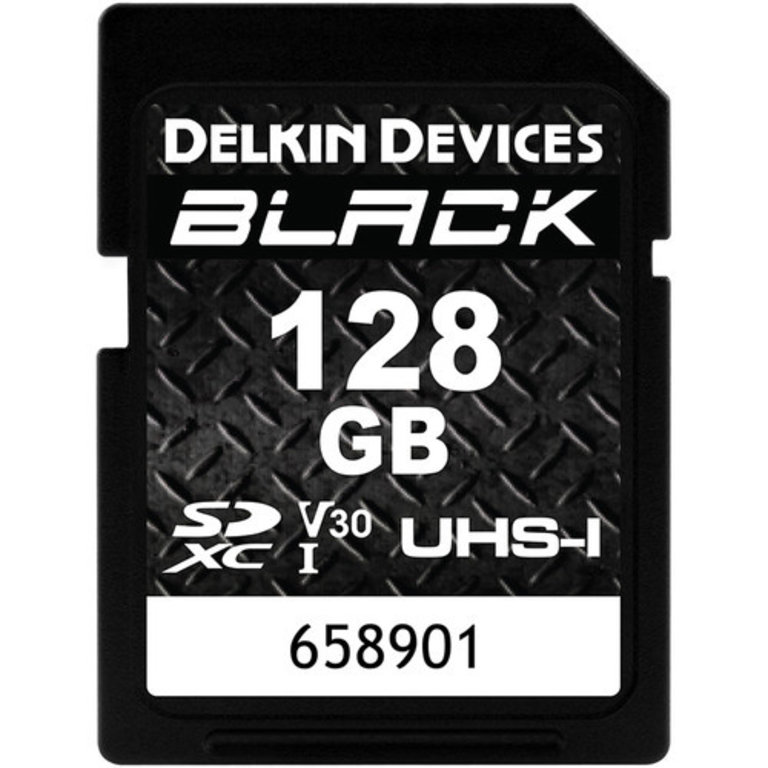 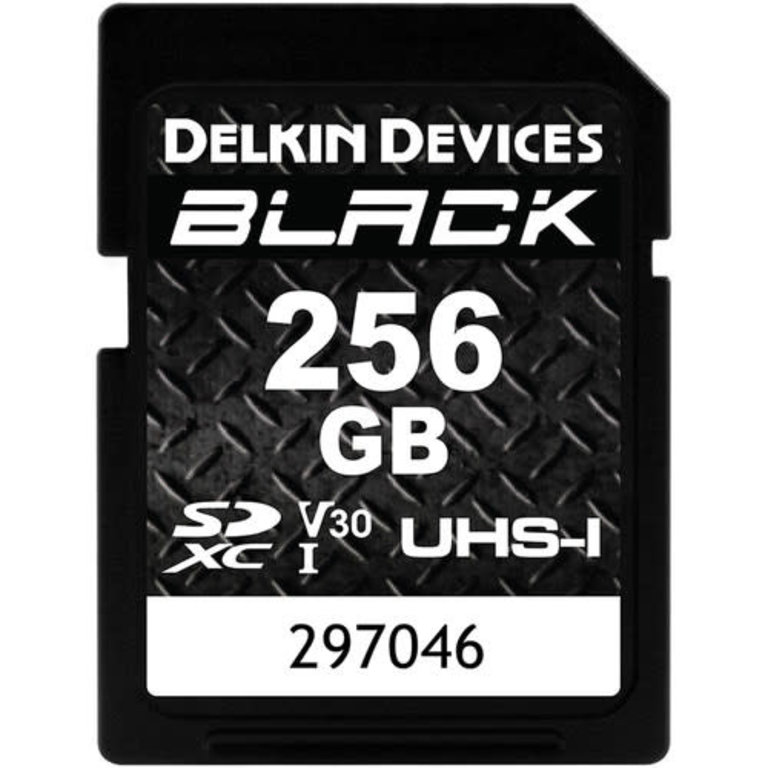 Combining industrial strength and reliability with fast performance, the 128GB BLACK UHS-I SDXC Memory Card from Delkin Devices features a storage capacity of 128GB and is designed for DSLRs and advanced camcorders that require faster speeds for demanding shooting modes. It is well-suited for raw and JPEG photo captures, as well as 4K, 3D, and Full HD cinema-quality video captures at high frame rates. You'll be able to achieve maximum read speeds of up to 90 MB/s and maximum write speeds of up to 90 MB/s. Thanks to its V30 speed class rating, minimum write speeds are guaranteed not to drop below 30 MB/s.

To help facilitate card usage in almost any environment, as well as keeping your content safe, Delkin has built its BLACK Series with a rugged design that can withstand 45 pounds of impact. It is also dust, x-ray, water, and shockproof, and resistant to temperature extremes from -13 to 185°F. In order to further enhance reliability and functionality, the BLACK Series was built with no write-protect switch or plastic ribs that run in between the contacts on the back of the card.

Utilizing a proprietary injection molding process, Delkin's BLACK SDXC card is designed to be three times stronger than a regular SD card and able to withstand over 45 pounds of impact. This specialized casing makes the card virtually unbreakable, with improved reliability and ruggedness. In addition to being significantly stronger and far less breakable than a standard SD card in bend/pressure tests, the BLACK card is also dust, water, x-ray, and shockproof, and can also withstand temperatures ranging from -13 to 185°F.

Delkin's BLACK SDXC card is built with no write-protect switch or plastic ribs that run in between the contacts on the back in order to enhance reliability and ensure functionality. By removing the write-protect switch, the card will never go into read-only mode, which prevents the card from being written to. If the switch of an SD card accidentally breaks off (regardless if it was in the upward position prior to breaking), the files already written to the card can still be accessed and copied off the card, though new data cannot be written to the card.

Capable of offloading data at speeds reaching up to 90 MB/s, this Delkin BLACK UHS-I SDXC card helps ensure quick and efficient data transfers from card to computer for immediate access to your files and sooner post-production start time. This is ideal for photographers and videographers who need to quickly unload large amounts of data and get back to shooting.

Delkin BLACK memory cards and those with the "48HR" come with a premium 48-hour replacement guarantee in addition to their lifetime warranty" policy. Delkin will replace any non-working card within 48 hours or less (not including weekends), prior to receiving your non-working card. You can also replace your card over the counter at any authorized Delkin BLACK reseller. To activate your BLACK card's free replacement program and lifetime warranty, simply register your card online with Delkin.